When Shakti and I were first introduced seven and a half years ago in Berlin, I was rather afraid of dogs, having been bit by a big black neighbor dog when I was maybe five or six years old. It didn´t help matters that Shakti was also black and pretty darn big, too. It took a couple of years before we worked things out and I began to fall in love with her. Initially reluctant to cede her status as alpha female, she eventually recognized my value as an additional person to toss balls, play tricks for treats and scratch her belly. In time I became a valued member of her tribe, to whom she looked for security and support. Und langsam, genau als ich Deutsch lernte, wurde sie meine süße, schwarze Zuckerschnute. I guess all of us think our pets are special, but we got stopped regularly, in two different countries, to be told how nice looking she was and so amiable and obedient, and even to be asked if other dogs could spend time with her to learn to be so well-behaved. The best compliment though, from someone here who was probably rather afraid of dogs, who expressed her wonder that such a big black dog could have such a cara de bueno.

To Shakti´s adoring public, I’m very sad to say she left us last week at the age of 15 and a half, after an extremely quick final illness. She got to camp out with us at the farm a couple of times the last few days, as the weather had turned so nice. We played with her favorite ball; this picture from our first anniversary party in March perfectly captures her eager anxiety that says `you do want to play with me, right??`.

We fought for sticks, let her eat whatever she wanted: pate, sausages, hot dogs, cheese. She sniffed around for some more psychedelic mushrooms from the rains a couple of weeks ago, without much success, as her sense of smell, along with her sight and hearing, had dimmed significantly. She dug as many holes as she desired and slept safe and sound in her doggie cart. She was only in true discomfort the final day, when we had her put to sleep right there in der Natur.

I had two odd dreams a few weeks before she fell ill, first that she was so sick that she needed mouth-to-mouth resuscitation, which I gave her (now that´s true love!); in the dream I didn´t find out the outcome. But at one point last week, she lost consciousness and stopped breathing for about a minute, scaring us to death, but reviving in time to go out to the farm another time.

The other dream was of cremating her in a wood stove (which seems less strange when you consider that I grew up in a house with two, plus I´ve been thinking for months of burying her in the central burn pit at the farm). In the final week of her life as she slipped away from us, I dug out a lot of ash and then a lot of dirt to replace it. When finished, we´ll have reclaimed this ash pit right in the middle of our nicest terrace, where we plan to plant a beautiful shade tree right on top of her. It will serve as a permaculture canopy layer, to form a shady oasis in the middle of the most intensive polyculture area, which we are currently transforming to a mixed garden/citrus mix with wild asparagus and artichokes as perennials as well as nitrogen-fixing ground covers.

Ashes to ashes and organic material to organic material, we would love to hear from you what tree you think should serve as Shakti´s monument. It would be ideally bigger than the surrounding citrus which typically is kept pruned to a height of some 4 meters, but not so enormous that it shades out too much area. And of course, as always in permaculture, it should work for its living, providing food, improving the soil and/or assisting companion flora or fauna. 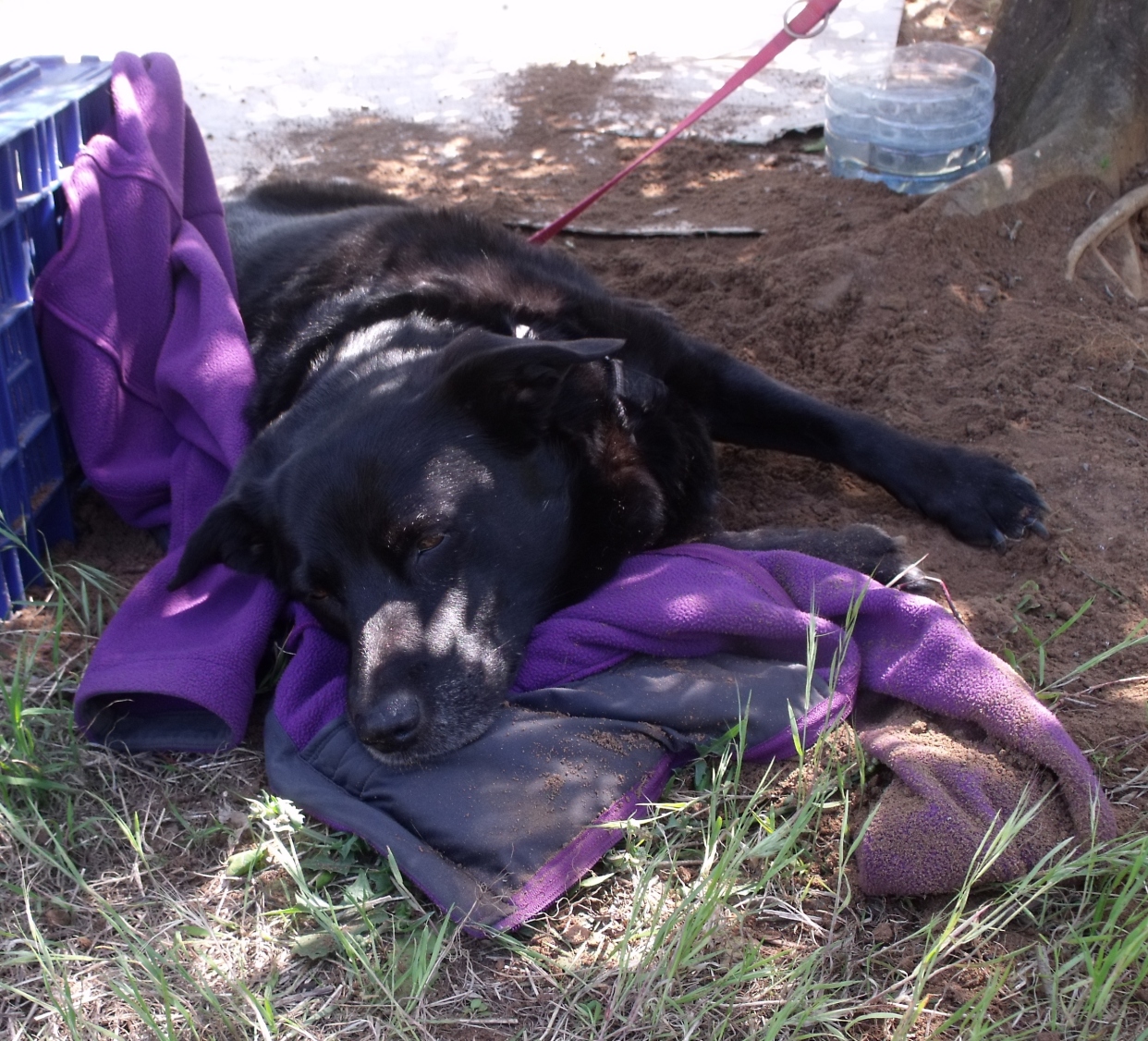 One final picture from last year shows how, after getting chained up for eating too many wild boar droppings, she managed to work her way off the cardboard meant to protect the tree, uncover a tree root, get my jacket filthy, then decide it would make a pretty nice pillow. That was Shakti: even when she was so naughty that she had to be punished, we had to avert our faces to hide our smiles, she was so damned cute.